Some questions and answers with Susanne Marie 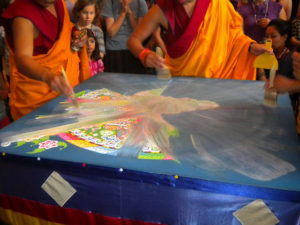 S: The Dissolving of Self is a process that over time thins out the thin veil still remaining of having a felt sense of self. This is a natural process during which love and trust in the divine deepens during the unity consciousness phase. Eventually leading to the extinguishing of the felt sense of being a person.

Questioner: Please define “felt sense of self – of being a person”. Is this what everyone feels, but ordinarily that’s all they feel, while in Unity, Unity predominates and the old sense of self continues to fade until it disappears? What phase did you have prior to unity consciousness? Was there a witnessing phase (a separation of Absolute and relative – Self separate from the world) or did you go straight from feeling like an ordinary person in the grip of maya to Oneness?

S: The felt sense of being a person is what arose as child as unity faded. And it was a painful condition, a contraction of sorts, overlaying the previous state of wholeness. It was something always sensed, which at times faded as I became absorbed in nature or in something. When I discovered Yoga and Meditation at 21, it was such a relief as I was able to drop this overlay during my practice and began the process of reclaiming what had been lost. This was the beginning of an intense seeking time wishing to reconcile what had become polarized. At times I was more successful than at other times. Unity came and went for the next 15 years and I could feel the veil of separation thinning out. I even used those words.
When my brother Daniel died 16 years ago, this sparked a profound awakening to emptiness which led to abiding unity. Even within unity, a sense of self remained, but now it was a self that was resting in the divine, in Being itself. It was no longer a problem and the ‘I’ was celebrated as being part and parcel of the One. It was very thin at that point, and no longer felt to be separate, but as an aspect of Self which was needed to operate as a person and which helped focus individuality. Over time even this faded away, with more a sense of an unlocalized self, with the ability to sense Oneness fading which was easily accepted. Operation continued with the ground of being as a felt sense fading away. The sense of self had been replaced with ground of being, of being life itself, etc, and this also began to fade until the spring of 2015 where it all fell away.

Questioner: In Vedanta, Lesh Avidya means “faint remains of ignorance”. The term is used to explain how Brahman or totality can be a living reality. The metaphor used is having a butterball in the hand, then throwing it off. Some greasiness remains. So, it is said, there must remain a faint degree of ignorance so that we recognize enough diversity to function in the world.

S: Whether, in fact, it is extinguished or moves to the background is not fully known (and how important is knowing that?). But it certainly feels that way. In the end it does not matter what is occurring, only that there seems to be no intermediary.

Questioner: “There seems to be no intermediary” – between what and what?

S: No intermediary as in: there is no one doing this life, feeling it, experiencing it. It is pure Is-ness. Another type of operation occurs (a new dimension of being), one more of being a sensing Being, where intelligence guides and navigates life in the Now.

Questioner: I need you to write the above sentence more clearly, but if I understand it, here’s my response: This may be semantics, but “Being” with a capital B is usually reserved for the impersonal Absolute. It doesn’t sense or navigate, nor is it guided. A “being” (lower case) can sense, navigate, and be guided.

S: There is no ‘one’ it is guiding, it is purely guiding itself. All experiences of the divine are experiential, meaning that there still remains a ‘someone’ to know. Unity Consciousness takes a knower. Unity Consciousness is only a relative truth and not Absolute Truth. Truth is ‘that’ which can never fall away.

S: Yes, awakening will be tested in the fires of Maja, and unabiding awakening is the condition that arises as long as Self is pulled into identification with form and loses itself there. The ante goes up within a lifetime, and during lifetimes. Of course, what has been realized is immutable, but does it know that throughout all conditions? Just because someone has a firm awakening in this lifetime, does not mean that it is forever abiding. The process continues until it is established within all states of consciousness (including death), and who knows what that will look like! The experience of life, existence, Ground of Being, as found in the unity state, disappears, including an inner experience of the psyche, emotions, and the need to find any kind of inner resolution.

Questioner: And yet you still appear to experience life, have a psyche, and experience emotions. Please explain.

S: The ‘you’ falls away, and what remains is what has always been. That is what lives out it’s life. And it appears to have a personality, feelings, uniqueness, etc. And isn’t that a nice thing? Within unity, it is all included and no longer a problem, and process still goes on, inner resolution still goes on. What changes over time, is the felt sense that there is any you left and what replaces that it pure expression living.

S: Pure sensory perception grows during the unity phase, becoming increasingly important and trustworthy. Less the knowing self and more the feeling/sensing self takes hold, eventually falling away revealing a whole new way of perceiving/operating without the need of a knower.

Questioner: Is “pure sensory perception” “increasingly important and trustworthy” because it is undistorted by personal bias or interpretation? “Knowing self” implies the head and “feeling/sensing self” the heart. Are you saying that too falls away and that the “whole new way of perceiving/operating without the need of a knower” means operating from the gut? Please clarify.

S: The knower was that which reflected on itself. This falls away to leave pure experiencing in its stead without an intermediary. Feeling/sensing remains as a pure NOW experience without a knower of it. For me the dissolution came with the dropping away of the contraction held in the body itself, identification with form, and with it came the falling away of having a sense of self.

S: While in Unity, one does not know that someday it is going to end (and it sounds almost ridiculous to even hear that), because it feels so complete, harmonious, and whole. The embodiment phase is a delightful inner and outer reconciliation with all of life, of all the disparate parts, and all the areas that have been in inner resistance to what is, regarding both one’s past and present.

Questioner: It sounds like you are equating the “embodiment phase” with Unity. Correct? Elaborate?

S: Yes I am. Embodiment is a time of reconciliation of all disparate parts and this arises within the understanding that all is One great whole. With this knowing, comes the ability and desire to bring all aspects of self that feel polarized back home. This includes how one views the world. It is a love affair with all of oneself, knowing nothing to be separate, in truth.

S: We cannot know something that we are not yet aware of. We can only know as much of something as we have lived or are living it. This is why it is so difficult to imagine how living life would look like with such a radical dissolution of self.

Questioner: And this is true at every level of experience, which is why this whole conversation may seem abstract to many viewers. Yet pondering this stuff, even if it is not yet clearly experienced, helps sharpen and clarify the intellect. It also may help people avoid the pitfall of mistaking mere understanding for actual realization.

S: Nicely put. My hope is that this adds to the spiritual map assisting others when the time arrives for them to be making a similar passage. The ability to self-reflect (to look within) ends. And with that, much of the past falls away except for what remains in ones memory (not so much in the feeling center). Processing feelings doesn’t occur in the same way. What became second nature while in Unity (feeling/inquiring into things and inner reconciliation), ends. Everything is just right here and now. If a feeling comes up, it is felt Now without a feeler being attached to it (i.e.; person).

Questioner: If there is no person, no feeler, then what is it felt by? Doesn’t experience always involve an experiencer, a process of experience, and an object of experience? If we remove the experiencer, isn’t it like removing a leg of a three-legged stool? You said earlier that “the dropping away of… identification with form (resulted in) the falling away of having a sense of self.” Are you saying that in the ordinary person, pure consciousness being overshadowed by experience (identification) creates the sense of individuality and that once pure consciousness is no longer overshadowed, the sense of individuality dissolves?
S: It is felt by Itself. The falling away over time of the self reflecting mechanism of mind thins out the experiencer eventually leading to what is pure experience without a knower of it. Just This Now. If you have need of more on this, please reframe your question and I will try again.

S: Adjusting to this new dimension is different for each person. In my case it took some time (many months of adjustment) as the body/mind learned how to operate with this new orientation. It is not an ‘experience’. It is the ending of experience, at least the way it was in the past, with someone still being there to self-reflect on it. Experience now occurs in the now moment, and moves on into now again without a trace of the past moment. This is something that one gets used to over time just like with any other kind of awakening, adjustment occurs.

S: The unity stage is not static, in that one continues to grow in the ability to sense deeply into being one with the Whole. Also, the ability to express undivided truth expands, emotional and body intelligence deepens, open-heartedness and acceptance grows, trust builds, etc. Eventually, even feeling One with all of life disappears as the sense of self thins to the point where it is barely perceptible (this was my experience). As the dissolution of self completes itself, inner growth ends in that particular way. The experience of self dissolving ends. When Unity falls away, we can see how much the sense of self was still in operation.