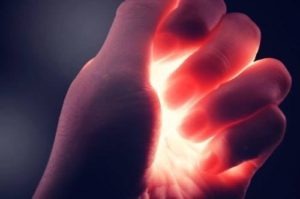 When realization first takes place, there is a distinct separation that occurs between form and the formless. The formless wakes up out of identification with form and realizes once again what it is. Even though in truth one cannot separate out truth, or divide it up, as truth is one great whole, (just like when we separate out the egg yolk from the whites of an egg, the egg will always be an egg), the mind benefits from seeing the difference. What are we in truth without the formless being glued in identification to form?

The formless, or absolute, or awareness/consciousness, whatever name you wish to give it, when it realizes what it is apart from form and becomes self-aware, it sees that it is not stuck in identifying with content, that it is free of content. Content is one half of what God is, and the formless nature is the other half. Together they make up one great whole. Being aware of both at once is what is called realization. The mind has the capacity to hold the paradox of duality within it. The way that mind is trained to operate, is to divide and to see itself (including the body), as a separate entity. This of course is totally a valid part of being able to operate and survive. And there is nothing wrong per se with it. What hurts is the obvious suffering (the thoughts and feelings of feeling inadequate and unworthy), that come out of feeling separate.

Psychological suffering arises out of the minds ability to self-reflect which creates the sense of having a continuous loop of feeling like we are a separate being (an ‘I’), from our environment. Often of course, many of us wait until we are suffering tremendously from the experience of separation before we bother to take a good look at what the mechanism is behind suffering and wanting a solution. Spirituality when used in this way can be incredibly useful and even scientific to a degree. Scientific in the sense that by placing attention on the one who is looking, the one who is noticing rather than just on what is being seen, gives results. The result coming from the mind (which is consciousness), separating out its identification with form and seeing what it is in truth made of, that it is the space within which content rises and falls rather than the stuff itself. This is extremely liberating.

So first there is the turn within to the absolute nature of consciousness, to freedom from the known (taken from Krishnamurti’s book title), and then there is the return back into content, whereby content/form gets to be seen as the other half of the equation. In the return phase, the known gets to be seen for what it is, that it is God in form, that it is consciousness dancing, that it is love in action, and that it is the Self. And still it is such a great mystery! The understanding that is gained is not solely intellectual, and even though it can be called an understanding, it is really a knowing. The knowing arises out of true revelation, that what we call emptiness and fullness, the form and the formless, are all inextricably interwoven into One whole fabric of Being.

There is a wisdom of how this understanding is gained within consciousness, and often it seems that what comes first is the awakening out of the dream, the dream of imagining that we are a somebody, and that what we are lies outside of ourselves. The sticky nature of content needs to be un-glued in order to see correctly. Many traditions point to this and offer practices of how to see that we are in truth spirit, God, or the Self. What isn’t spoken about so much, in the old traditions, is the return phase, of the re-entry into form and the living embodiment of what that looks and feels like in the human. Consciousness keeps evolving in its own understanding of what it is, and we are that awareness forever waking up to itself and what it’s own capacity for self-awareness can bring. What gets to be seen in the end, is that freedom is inherent within all conditional states, that nothing is ever lost in the so-called dream, and that presence is contained and made up of all content.