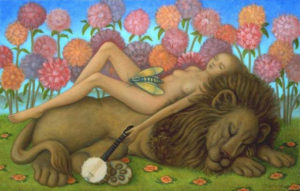 ‘It seems to be a maturation of consciousness to know itself as the whole throughout the human system.’

Has anyone else reading this had the experience of having known Oneness as a child? How do you know something until you begin to feel like you are losing it? Sometimes it takes the absence of a thing in order to know what you had. If you are a seeker, or once was, what is it that led you to seek? Can we seek for something without having had a remembered taste of what we are wanting? Otherwise, the absence of that something would be unknown. So, we long for something inherently known.

As a child, I knew Oneness, and I remember the feeling of what I now call separation descending over me, like a cloak. I really became aware of the painfulness of this when I was around 7. In fact, I told my Mother that I felt like my childhood was over. That was how I described the feeling of loss. It was not just innocence being lost it was more the knowing that I was losing a battle with Maya (illusion) itself, the dreamlike mass hypnosis, that my parents and most other adults seemed to inhabit. When we are under the influence of Maya, we do not experience people or circumstances as they are, but rather we place a projected overlay on life based on our belief that we are separate from existence. I was viscerally aware of this at the time, even if I did not know exactly what it was that was disturbing me. How I described it to myself was like this: the adults around me were pretending much of the time, and it was up to me to notice when they were being authentic. I longed for authenticity, as that was what made sense to me. I was catching on to persona, and it hurt.

I maintained the bubble of ‘Oneness’ with my brother Daniel for many years. In fact, it remained the primary way that we related. This relationship supported a way for me to live in this fractured unconscious world. It helped me in my relationships with those closest to me, I would relate to them from this place of wholeness, which had a grounded base in me. Even as I felt separation take hold of me, a place remained inside that knew better and still saw things as whole. That is why it hurt so much! As soon as I felt the disappearance of this sense of wholeness, I wanted it back. Thus the seeker was born. I sought it first in others, looking for authenticity in a person’s eyes, their behavior and voice. Somehow authenticity to me equaled wholeness, that moment when someone was really there without the layer of persona. I rejected developing a persona as much as I could, knowing as a teen that deconstruction was more interesting to me than constructing a self. Not all of this was conscious, though, and it confused me at times even while I knew that I needed to follow something inside that knew better. This was difficult in a world which, valued development and creating an identity. So I went towards the systems, which were the closest to valuing what it was that I longed for. I studied yoga, meditated, and did bodywork in order to undo what I felt to be layers upon myself. Eastern philosophy captured my attention with its focus on a ‘reality’ being available that hinted at what I had lost, and I became more officially a ‘spiritual’ seeker, creating identity along the way. Funny how in order to undo identity, I created another one! Honest mistake really, as the straight cut to the chase path is hard to find, or maybe see. Perhaps you have done this or are doing this now yourself?
It is all fabricated though I now know that. Having oneness and then losing it is a journey of the mind, and then finding it again is the mind waking up to itself once more. We don’t have oneness; it is what we are. The mind with its story of an ‘I’ experiences itself as fractured and separate from the rest of life. It seems to be the way it works! I am just glad that we have the capacity to remember once again what is true. This is what is called awakening, remembering what is true; that we are all one thing we are life itself, even though we have the experience of being a separate ‘I’ in the midst of being One thing.

So, what is your experience? If you are a seeker, what are you seeking, and what is the impulse, which drives you? What if that impulse, that outward going energy is already home and just needs a chance to stop, turn around and notice that nothing has changed, that you have always been here and that you are a part of the seamlessness all around you. If you long for something, it means that you know it somewhere inside of you, let that what is known in the background move into the foreground. It is what you are.